Our 10th MKKI UK Branch Gasshuku started with the arrival of Sanguinetti Sensei, and for the first time Gaines Sensei, on Wednesday 2nd September 2015. Gaines Sensei is one of Sanguinetti Sensei’s top Dan grades in the MKKI, and I was pleased to meet him and to train with him over the weekend. They both arrived at Darlington Station late afternoon after landing from the USA in London and training up to Darlington. They checked into their hotel and we all, including Chris San (my wife) went out for the evening meal. It was nice to see Sanguinetti Sensei again and getting to know Gaines Sensei. 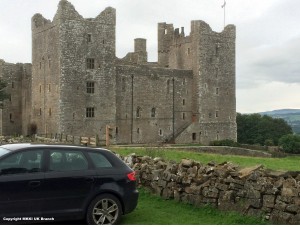 The Thursday 3rd September Chris and I had arranged to show Sanguinetti Sensei and Gaines Sensei the old Bolton Castle near Leyburn. They are both into history so I knew they would enjoy this visit. Travelling through the Dales we finally arrived at Bolton Castle thanks to my trusted SatNav, as I have a reputation of turning left when it should be right and going north when it should be south.  This became a “leg-pull” for me throughout our time together as Chris enforced this reputation. However, I did get there and we all explored the castle finally leaving mid-a 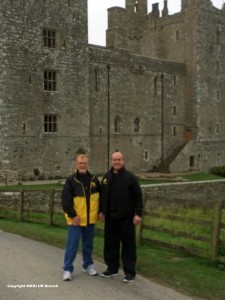 fternoon. Instead of going straight back to the hotel, I thought it would be good to deviate via Tan Hill and show Sensei the highest pub in the UK. When we arrived we went in for a little tipple; it was a good atmosphere with visitors and the fire was burning giving the pub that old smoky smell from days gone by. I’m sad to say that when we left my SatNav decided to play up, but I knew the way home. Turn left from the pub and set off down the moors road. Then a voice from the back of the car said “you’re going the wrong way it should have been right”. Dam my orienteering skills have kick in again; so I had to gingerly turn around on the small moors road – thank you Chris. After some time I still thought we were going the wrong way, but I was convinced when my SatNav decided to come back on. I was in for some more “leg-pulling”.  Finally we arrived back to the hotel and planned to go out for the evening meal at Walworth Castle. We had been here in previous years but Gaines Sensei has never eaten in a real castle before so I thought it would also be good for him. 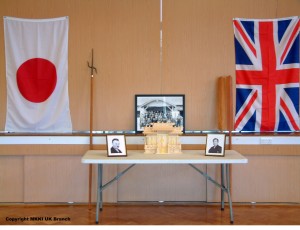 On Friday morning I picked up Sanguinetti Sensei and Gaines Sensei for the start of my Gasshuku training. This was held at the Clifton Centre from 9.30 till 1.30 pm and Sensei put us through our paces going over some Hojo Undo, expanding on what we knew and giving some fine details, and answering some questions I had on Kata and Bunkai. It was good to train with Gaines Sensei and to be the Uke on some of the Bunkai. In addition Sanguinetti showed me some of the first few moves to a new Sai Kata called Shinbaru No Sai. This had a totally different feel to the first two Sai Kata in that it got you moving in different ways and different co-ordination. I can see this was going to be challenging to learn and a very interesting Kata. After training we went out for a pub lunch and I then took Sanguinetti Sensei and Gaines Sensei back to their hotel to rest before the evenings Instructors training at 6.00pm. During the evening session we had the arrival of Brüchner Sensei and his wife, Barbara, from Bavaria in Germany. I was glad to see them make this trip and to get acquainted with our MKKI 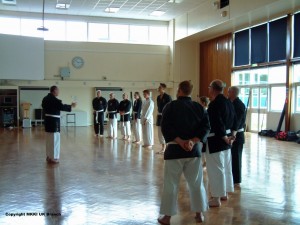 German Branch. We also saw McKenzie Sensei from Scotland on his first Gasshuku, and arriving late was Philip San from Nottingham. Poor lad had to get a taxi from York to Darlington as there was a problem with his train. Very expensive trip but he got here around 7.00 pm much to his commitment and enthusiasm to train.  After 3 hours of training we stopped to finalise the night with a get together around the table with Domino pizza brought into us by Chris, and good conversation after which we took Sensei back to his hotel. 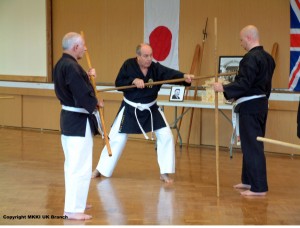 The Saturday morning started by picking up Sanguinetti Sensei and Gaines Sensei for training at 10 am at Longfield Academy. When we got there Sensei went round to meet and greet all the participants.  After our formal bows Sensei gathered us around and explained why we were all wearing white belts. It’s to remind us not to forget our initial intensions; that is we all should remember that although we are of all different grades we are still beginners, and not to think that we know everything that we have already learnt. For example our first technique in Bo No Hojo Undo Dai Ichi, there is always room to improve and refine it. We started the day with Junbi Undo, warm up exercises where Sanguinetti Sensei had us all counting to 100 and beyond in Japanese. After this we went onto Bo No Hojo Undo Dai Ichi, followed by the Bunkai. During this time Sensei always mad 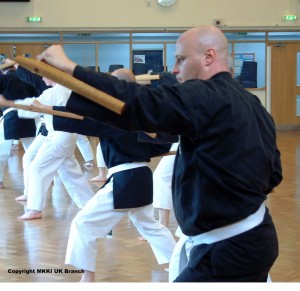 e sure that we were using good technique and correct body mechanics to perform power and penetration in strikes and blocks. The Bunkai is carried out with power on the strikes, so our blocking had to be good. However, in order for us to learn to control our strike some of them were not blocked. Here we had to trust our partners.  The Hojo Undo was followed by Shushi No Kun Kata and prior to the practice of this Sanguinetti Sensei gathered us around and explained the meaning behind Shushi No Kun and some of the history. After going through this Kata we all separated to practice the Bunkai. The morning went by very quickly and we broke for lunch, which gave time for making notes on what the morning’s training.

The afternoon started with Bo No Hojo Undo Dai Ni and the corresponding Bunkai. This was followed by the second Kata, Choun No Kun, and again Sensei explained the meaning behind this Kata. After this we went onto Tunkua and as before Sensei gathered us around and explained the history behind this weapon. Once back in class lines we were training in Tunkua No Hojo Undo which lead into the associated Bunkai. Paring up for this soon showed us how Good/Bad we were in our techniques as we had to block and counter incoming Bo strikes with the Tunkua. This is because Tunkua requires a lot of body movement to carry out the techniques with proficiency. To finish off the day we performed the Tunkua Dai Ichi, the first Kata for this weapon. By this time of the day most of us were exhausted and mentally tired, but feeling euphoric on the day’s training. Finishing of the training at 4 pm Chris and I took Sanguinetti Sensei and Gaines Sensei back to their hotel, while Rob San took Brüchner Sensei and his wife back to theirs, and Mike San took McKenzie Sensei and Philip San back to their hotel, so no one was stranded. 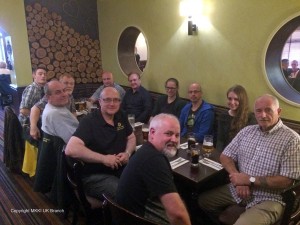 On the Saturday evening some of us got together for the Gasshuku evening meal at 7 pm at the Burtree Inn. This was a great evening with good food, company and conversation. Everyone at the meal enjoyed the night. It gave us time to switch off from the up and coming grading, which was going to take place on the Sunday afternoon.

Sunday soon came up on us, and it was going to be a long day as we started at 9.00 am and would not be finishing until 5.00 pm. But I knew from experience this time would flyby. The afternoon was going to be grading for the students that were ready for their next grade. I too was recommended to take the Sanda 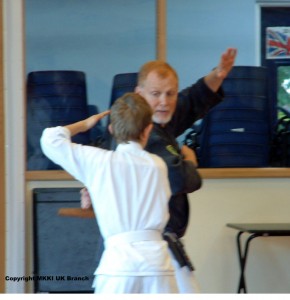 n test and was nervous about this, but this soon went as the day’s training started. Sanguinetti Sensei again started the morning with Junbi Undo, warm ups, which followed with Bo No Hojo Undo Dai San and associated Bunkai. After this we changed weapons to Sai, and trained in the Sai No Hojo Undo and the Bunkai. This was followed by Nicho Sai Kata and its Bunkai. Sanguinetti Sensei then separated us and some continued to work on the Nicho Sai while higher grades went on to train in the second Sai Kata – Sancho Sai. Lunch time soon came around, which gave us time for writing up our notes. 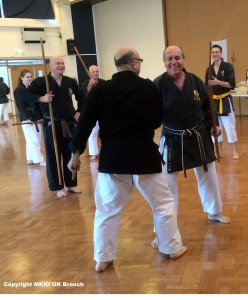 all lined up for our grading which was going to be all afternoon. The students that didn’t grade also lined up as Sensei says it’s another chance to get some training. The grading works by starting with 8th Kyu syllabus and then going through the grades up to the highest grade, which in this case was Sandan, as I was in the line for this test. By the end of it I was exhausted and my mind was numb, but I was not the only student going through this as next to me was Gaines Sensei who is a Yondan. He was also to be my partner in bunkai. I was extremely grateful that Gaines Sensei was there as his presence and commitment pushed me on.

At the end of the day Sanguinetti Sensei announced the grading results and I would like to say congratulations to all who passed: 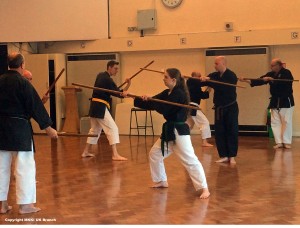 And yes I’m very please to say that I passed my Sandan.

Throughout the weekend Sanguinetti Sensei had also worked with me along with Gaines Sensei. We covered all of the associated weapons; and I also had time to work the Sai Kata Shinbaru No Sai which Sensei showed me on the Friday.

My Gasshuku didn’t finish here as I was invited to spend more time with Sanguinetti Sensei and Gaines Sensei on their visit to Scotland. During this time I met Sanguinetti Sensei’s daughter Nicolla San. I felt very honoured and accepted their kind invitation, so I had a great time in Scotland from Monday to the following Friday – this will be another article.

Before I end this report I would like to say thank you to all who made our 10th Gasshuku weekend very enjoyable and challenging. A special thank you goes out to Brüchner Sensei and his wife for coming from Bavaria in Germany. It will be good to see them again in the near future either here in the UK or Germany. Also a special thank you from me to Gaines Sensei for coming to the UK from Nebraska, USA, he was a great influence on me and my students. I hope to see him again in the future, and feel that I have made another good friend. My final word goes out to Sanguinetti Sensei for again making time and coming to the UK and teaching us the real Matayoshi Kobudo affiliated to the Matayoshi family in Okinawa. Without Sensei’s invaluable knowledge in this art we would not be where we are today in Matayoshi Kobudo, so my heartfelt Arigato Gozaimasu goes out to Sanguinetti Sensei. We in the UK will always strive to do our best according to your teaching! 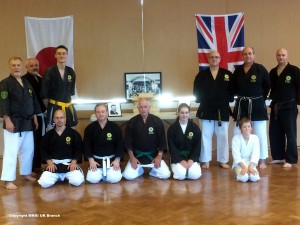