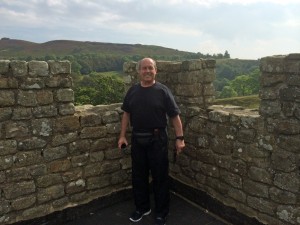 2014 saw the 9th Annual Matayoshi Kobudo Kodokan International Gasshuku. Again this was held in Darlington on the 5th to 7th September. Sanguinetti Sensei arrived at Newcastle International Airport on the morning of the 4th September. As Sensei likes history we took him to Vindolanda and the Roman Army Museum near Hadrian’s Wall. It was a long day for him so we checked him into his hotel, the Grange Darlington at 4 pm, so he could be refreshed for the start of the Gasshuku on the Friday.

On Friday morning Bateman Sensei had 3 hours private tuition, working on the following kata for Nunchaku, Nunti and Kuwa.

The Friday evening of the Gasshuku was for the instructors of the MKKI. This year we had two ladies from the MKKI Venezuela Group to join us here. They were Sensei Yuraima Borrero and Gisela Duran. During the evening after warming up we covered Bo and the associated Bunkai. We then moved on to drilling Sancho Sai Kata. The evening was finished off socializing and eating pizza. 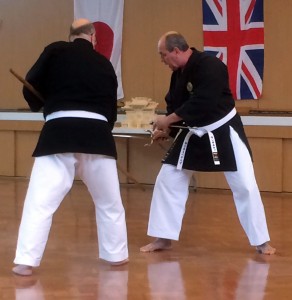 On arriving at Longfield School gym at 9.30 am Saturday morning everyone was keen to start. The day was going to be long training from 10 am to 4 pm, but we all knew we were in for a great day’s training.  We were told by Sensei to wear white belts, which we did including Sanguinetti Sensei. He grouped us together and explained the reason for this. His explanation was first in Japanese as he showed us the Kanji, which was embroidered on his white belt. He said he would provide me with this kanji and the explanation so we can get them embroidered on our white belts for future Gasshuku’s. The explanation is to remind us on where we have come from, and so that no one focuses on their coloured belts.  For example a high grade may think they know the techniques that they have done 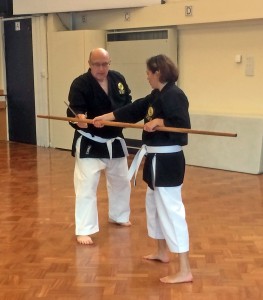 for many years, and therefore miss the important aspects when it is taught again; having a closed mind to what is being taught; in other words having “a beginners mind”.

We started with the warm ups that is always done with the Bo. This was followed by the Bo No Hojo Undo and associated bunkai. After kiuke (a break) we moved onto Sai No Hojo Undo; perfecting and becoming confident in each technique and the weapon. This year Sanguinetti Sensei expanded on the bunkai, which was more advanced than previous years. The reason for this was the fact that we had become more capable of handling the sai. It involved linking up the bunkai giving much more attacking and associated counters. Just when you thought 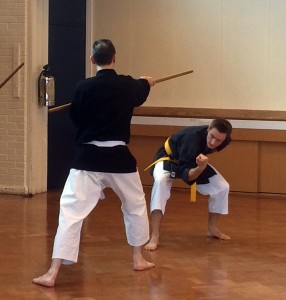 you had the bunkai nailed, it then expands and takes on a new meaning. Sensei was happy to see that we no longer was looking to hit the opponent’s weapon, but looking to strike the opponent with depth and determination. Whoever was on the receiving end of this attack had to make sure that they blocked that weapon, but conversely the attacker had to have the confidence in controlling the weapon if the block was not made correctly.

Lunch time came around quickly which not only gives us time to had some fluid intake and a bite to eat, but also to write up some notes on what was taught during the morning. In the afternoon we changed weapons again to Tunkua. The first part was to drill the Tunkua No Hojo Undo. This was followed by Tunkua Dai Ichi, the first of the Tunkua Kata. 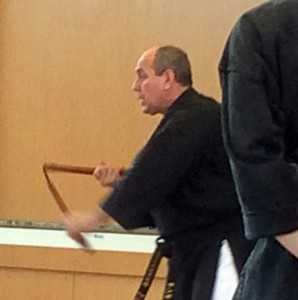 While the group was working on the Kata, Sensei took me to one side and started teaching me the 3rd Dan Bo Kata, Sakugawa No Kun. As we went through this he explained the associated bunkai, which was completely different to what I expected just by seeing the kata. This explanation of the bunkai just reinforces to me that you can’t learn these kata just from DVD; you need a good instructor to pass on the knowledge. This kata is so much harder to learn than Shushi and Choun no Kun and I can now see why it is a 3rd Dan kata. 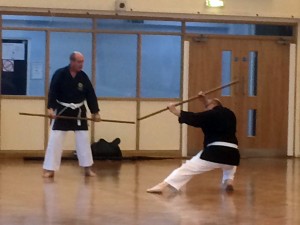 By 4 pm we were full to the brim with information and tired from the day’s training. But we all had to admit that each year the length of training is getting easier to cope with. A group picture was taken in our white belts and one with the two ladies from Venezuela. Now it was to be a quick shower and back out for the Gasshuku evening meal at The Farmhouse Inn for 7.00 pm. The company and stories during the evening were good making the evening go by quickly. 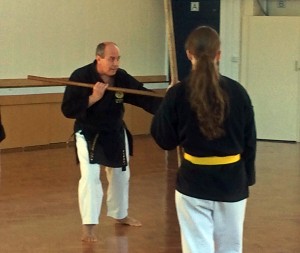 On the Sunday the group wore their normal belts and similar to last year’s training the day started at 9.00 am. After the normal Bo warm up we started with Bo no Hojo Undo Dai Ni and then moved onto the bunkai. As with the Sai during Saturday’s training this bunkai had also been expanded, and more in-depth explanation was given by Sensei. We focused and worked on blocking and countering with continuous movement and getting Maai right – the concept of movement, timing, space and opportunity.

After a short fluid break (Kiuke) we changed to nunchaku. This started with the usual weapons Hojo 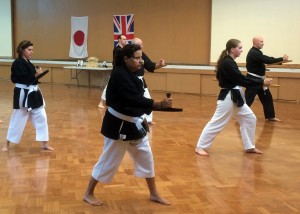 Undo. Sanguinetti Sensei explained that every movement involved either a strike or a block. So what looked initially like a catch was not! He then split the group into two the higher kyu grades concentrating on the Nunchaku kata. While the lower grades went on to practice their Bo Kata Shushi no Kun bunkai.

Throughout the weekend Sensei reinforced the concept of Karada To Bugu Issho – Weapon and Body are One; together with Go No Sen, Sen No Sen and Sen Sen No Sen. 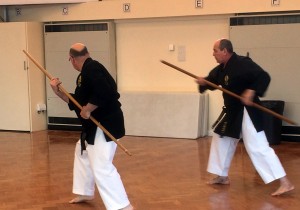 Lunch time came around quickly and we broke for some fluid, something to eat and to write up our notes. Straight after lunch students that were recommended to grade had to go through their syllabus under the watchful eye of Sanguinetti Sensei. I sat on the grading table taking down notes of various improvements that should be made for the coming year. I like to congratulate all the students passing their grade; these were:

All had enjoyed the weekend and have got a lot from it and said it was the best yet; at least until next year! Sensei was very happy with us saying that we are all progressing in a strong positive direction.

I would like to say a big thank you to Sanguinetti Sensei for keeping Matayoshi Kobudo alive around the world; he told me he goes to 14 different countries and for giving up his time come to us in the UK. We are all looking forward to train with Sensei again for our 10th UK Gasshuku in 2014. 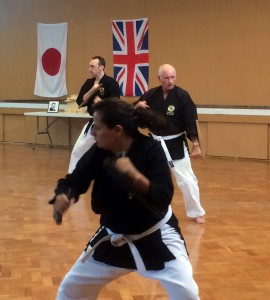