Below is the 3rd article of seven which was written by Bateman Sensei and published in the magazine Martial Arts Illustrated. 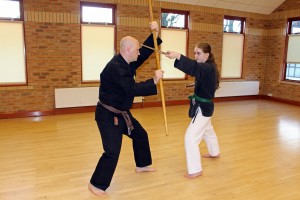 I think the Sai catches many practitioners imagination, due to its shape and how it is used. I remember my first pair I got for Christmas and sat practicing throughout the day on trying to flip them out and back in again. I think it attracts many practitioners because of its shape, it’s a metal weapon and it can be flipped. It is the second weapon in the series of Matayoshi Kobudo where a novice would describe it as a typeof “dagger”. But it has similar strikes and blocks to that of a truncheon. In Sai-jutsu the practitioner normally uses two Sai, one in each hand. However, there are occasions that three Sai are used, where the third is held in the belt at the back of the person wielding these weapons.

Because of the nature of the weapon they provide the student the benefit of learning techniques for close combat. This is a benefit of instilling the practitioner with the skills of correct Maai, the distance and timing, for short range weapons, such as with the knife. Another advantage of Sai training is due to their weight which develops good forearm and wrist strength and in turn grip. After an hour training with sai the beginner can feel the burn in the arms; which also benefits our empty hand martial arts.

History of the Sai 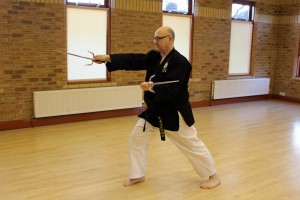 Again, like all the kobudo weapons the Sai has no recorded history; how did its’ origin come about? Well the simple answer is no one knows exactly and there is a lot of speculation out there. Below I will provide these and give my opinion to the one I think seems most logical.

Kobudo weapons are mostly farming/fishing tools and therefore one theory is that the Sai was used as an agricultural tool. It is said to have evolved from a dibber, a tool used to create furrows and holes in the ground for planting. Another is a small hand held pitchfork for picking up hay. Both of these I think are most unlikely. Firstly farmers were Heimin, poor commoners, and therefore metal would be expensive and precious to them. I don’t think they would design such a tool to furrow the ground when a stick would do the same job. Secondly they did not harvest hay as their farms were mainly paddy fields. Thus the Sai is not a result of a farming tool, but one that has been designed as a weapon.

Another theory is that the Sai was designed upon a ladies kanzashi, hairpin, which had a similar shape to the Sai. Another was based upon the Kanji for Migi (right), and Hidari (left). If you look at these kanji you can see the possible shape of the Sai, and being left and right we have two Sai. However, I must admit this is stretching the imagination. 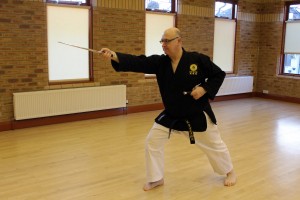 So say that it was designed after the Buddhist symbol seen on shrine roofs, which is the religious symbol known as the Manji. This shape is the reverse swastika symbol which if straightening out the top and bottom of the symbol we get the shape of the manji Sai. Then turning the upward pointing guard downwards the Sai shape is obtained.

It is this last theory that in my opinion is the most probable as to the origin of the Sai. We do know that similarly shaped weapons are in other Asian countries’ histories. These include India, Thailand, China, Malaysia and Indonesia. In Indonesia the weapon is known as the Chabang, and in Malaysia as the Tekpi. In fact it is thought that the Tekpi was derived from the Indian Trisula which is a long or short handled trident. It is believed that the Sai was introduced to Okinawa from Chinaby Chinese officials in a trading era.

Officer's Chiku and Saji, who acted as both judge and police at the same time, carried Sai in order to protect the King, control crowds, and catch criminals. There was a similar weapon called "Jutte" which was used by police officers in mainland Japan. The Jutte is not an Okinawan weapon and not used in the Matayoshi system.

However, Sai is usually used in pairs with a third sometimes carried as a backup. It is good for both defense and attack. Sometimes it can even be thrown to stab a runaway criminal. Sai implies an ornamental hairpin and it was mentioned in the Chinese war tactics book "Bubishi". It has been actively practiced in Okinawa as a martial art for a long time. This technique was handed down to late Shinko Matayoshi Sensei by Higa Sensei (Gushikawa Tiragawa) who came to Gushikawa village from Shuri. His techniques are now passed down through his son Matayoshi Shinpo to this current date through the MKKI and the Kodokan in Okinawa.

Construction of the Sai 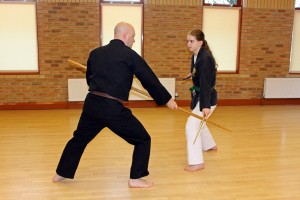 The Sai is made of metal, with normally iron or chrome plated shaft with upward curved guard. The size varies and depends on the individuals forearm. The shaft should cover the forearm and extend past by around 3cm for total protection. The guard size is also important and should not be too wide, around 4cm from the shaft. This enables the weapon to be used to catch and trap other opponents’ weapon, such as the Bo or Katana. The parts of this weapon are described as follows:

The Sai is a short range weapon where the user will have to get in close to impart the devastating variety of strikes, blockand entrapments. They can also be thrown, which is normally to impale or pin the foot of the opponent.

This technique can be seen in the Matayoshi Kobudo Sai Kata. They are usually used in pairs, but some kata uses a set of three, such as in Sai Dai Ni (Sancho Sai Kata) where the third is taken out from the back of the belt after one of them has been thrown. 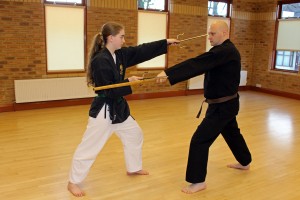 Because of the Sai’s ability to be flipped it provides the student with the capability of providing blocks and strikes at different heights. With the Sai retracted the student has protection along the forearm to carry out forearm blocks. In this position the use of the tsuba enables the opponent’s weapon to be hooked or trapped. Then the Sai tsukagashira, pommel can come into play with a strike. Conversely the other Sai can be flipped out to strike the opponent with the monuchi and stab with the saki. When both Sai are in the out position the Sai can be used for entrapment of a weapon, such as the Bo or Katana. This is done either by catching the weapon in the tsuba and twisting the Sai to lock the opponent’s weapon, or by kosa uke using both Sai. It is said that the Sai was used to break the katana by this twisting method.

To use the Sai the student must be dexterous in order to balance and rotate the sai around the thumb by loosening and tightening the grip. The techniques should also incorporate hip movement along with the elbow, wrist and locking of the shoulders to produce powerful strikes and blocks.  I see many practitioners just using shoulder and wrist in their strikes and blocks whereby their power will be lacking as body mass will not enter into the equation. As with empty hand arts the power must come from the tanden, the abdomen. In addition to the power generated by the student’s body it also comes from the penetration of the weapon upon striking or blocking. So we see a lot of suri ashi, the sliding movement with the Sai in order to penetrate or absorb the opponent’s strike.

The Matayoshi Kobudo Kodokan system teaches this in Sai No Hojo Undo and the various Sai Kata, Nicho Sai, Sancho Sai and Shinbaru No Sai. As with all the weapons taught in the Matayoshi Kobudo system it is steeped in partner work through its bunkai of the hojo undo and kata. The student learns the important distance required and how to break the opponent’s posture and balance prior to delivering the devastating strike.

I wish to thank Sanguinetti Sensei (MMKI) for his time and contribution in helping me information in this article.