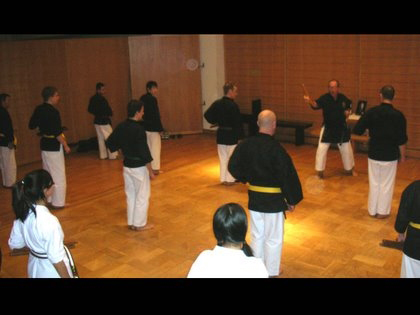 In 2007 Sanguinetti Sensei was invited to the UK for the first time. This event was held in Leeds for one day and a day in Essex. Although there have been hybrid systems of the Matayoshi style, this was the first time the UK had seen the official system of Matayoshi Kobudo. Over these days Sensei introduced the Bo and Sai, giving the UK students a taste of Kobudo as it had been passed down from Matayoshi Shinpo Sensei. The primary techniques were covered in both weapons, i.e. the Hojo Undo’s. Due to the excellent tuition by Sensei Sanguinetti the UK students had a good introduction into this art. The students that had experienced the hybrid system immediately saw an improvement in this official system. This encouraged the students to join the MKKI and form the Matayoshi Kobudo UK. The event was well received by all the participants and was looking forward to the next time. 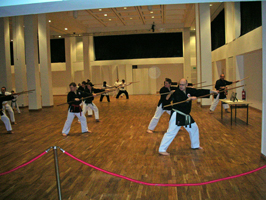 The Matayoshi Kobudo UK saw the second 3 day Gasshuku held again in Leeds. Sanguinetti Sensei came back to the UK to reinforce the fundamental techniques of the Bo Hojo Undo Dai Ichi, Ni and San. In addition an introduction into the Hojo undo for the Sai and Tonfa were also covered. Some time was spent on the first Bo Kata, Shushi no Kun, and Nicho Sai Kata. For the more experienced students Tunkua Dai Ichi was also introduced. During the Gasshuku the Bo and Sai Bunkai was taught and improved. It was during this Gasshuku that the first grading took place for the Matayoshi Kobudo UK members.

2009's Gasshuku covered more of the Bo, Sai, Tonfa up to and including Shodan. This was aimed at different levels depending upon the various capabilities of the attending students. There were more Hojo Undo for these weapons and Bunkai. For the instructors

Nunchaku Hojo Undo was covered. Again a grading was carried out for all eligible UK members. All attendees enjoyed their time training and positive feedback indicates that 2010 Gasshuku should go ahead with some success and indeed it did.

This was held for the first time in Darlington, seeing students coming from all over the UK as well as Portugal. The Friday evening of this 3 day event was for Instructors, where Sanguinetti Sensei covered various techniques and explained how to prevent the nunchaku from bouncing back towards the user when striking the target. During the Saturday and Sunday Sensei stressed about the “Body and Weapon are one”, and “not to Muscle” the techniques. After a hard day’s training on the Saturday saw 21 of the participants attending the Gasshuku Dinner, followed by a get together at the hotel where Sensei was staying for an open forum. On Sunday saw more students coming to train, and during this day Sensei covered the aspects of “Go No Sen”, “Sen no Sen” and “Sen, Sen No Sen”. As in the past two Gasshuku’s it finished with a grading for members.

This was held in Bolton during March 2011. Instructors had two days training, with juniors being taught for the first time in the UK by Sanguinetti Sensei. For the instructors, the completion of Nunti No Kata, and refinements in its application was taught. The juniors were introduced to Bo Hojo Undo Dai Ichi, while the seniors covered Sai and Tunkua Bunkai. During the senior session Sensei explained the important of power, using the floor and hips in addition with the pulling hand. Explanation in the penetrating application was also covered with Bo and Sai.

Over the weekend, which was held in Darlington in September, Sanguinetti gave tuition in Bo Hojo undo, 1 to 3 with associated Bunkai, Shushi No Kun and Bunkai, Sai and Tunkua. For the Instructors, more detailed instruction was given in Bo Hojo Undo Dai San and Bunkai, Choun No Kun, Sai Kata, Tunkua Kata, Nunchaku, Nunti Kata and Ueku Kata. The Gasshuku meal was a great a success and enjoyed by all and attendees went back with Sensei for drinks and socialising. During the weekend grading took place and all passed. Students now can't wait until Sanguinetti Sensei returns next year for our 7th UK Gasshuku.

We welcomed for the first time this year a MKKI instructor from Belgium, Ruy Sensei, and hope to train with him again soon. As always a great weekend was add by all with Sanguinetti Sensei teaching the Bo, Sai and Tunkua, and their related Kata and Bunkai. Much more principles were explained with each of the weapons, with fighting distance, penetration and dissipation of power. To end the weekend students were graded and all did well and passed.

This was our 8th year of Gasshuku in the UK, and now the feeling from the students was that everything was beginning to gel in the understanding of movement and breaking body posture of the attacker. Further explanation was made to Go No Sen, Sen No Sen, and Sen Sen No Sen. A full report of the time during this weekend can be read in the posts.