Below is the sixth article that was published in the MAI magazine about Matyoshi Kobudo. I would also like to thank Sanguinetti Sensei in his assistance and advice in the writing of the article.

In Okinawa this weapon receive the name of Ueku or Eku, meanwhile in mainland Japan is commonly known as Kai. It is known as the fisherman’s sword, as the edges can be used for cutting. The weapon has a displaced centre of gravity and therefore more difficult to master than the Bo. So in the Matayoshi Kobudo Kodokan system this is the sixth of twelve weapons that is taught. It is uniquely an Okinawan weapon but often seen practiced in other weapon schools. Furthermore, it is a weapon that is mainly used by the advanced Kobudo practitioner. When I first got involved in martial arts, Kobudo was rare. There were plenty of schools for empty hand, and dotted around there were schools in Kendo (Japanese sword art), but Kobudo was not known. Today, it has become more popular but still not many Kobudo schools exist. There are some empty hand schools in 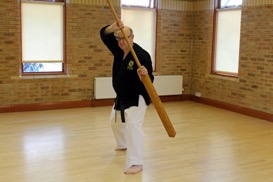 what I would say “dabble” in Kobudo weapons, such as the Bo, Tunkua and Nunchaku, but not exclusively train with these weapons. As a consequence they don’t get a chance to study the advance weapons of Okinawa. I was exactly the same when I first got involved with weapon training. I would go along to seminars and short courses to pick up various techniques in the common weapons of Kobudo; the Ueku was nowhere to be seen. It was not until I found a school that trained specifically with these weapons that I came across this unique weapon. The downside was I had to travel far to learn this art, but my passion for Kobudo kept me going. This is where I came across the Ueku, but as I did not have one I had to perform the techniques with a Bo. At the time I didn’t know, but the feel of the weapon would change once I had a Ueku to train with. So I wouldn’t recommend training with a Bo especially as the Ueku can now be obtained in this country, 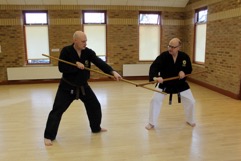 Okinawa is one of the islands in the Ryukyu Archipelago that span’s from the southern tip of Japan to Taiwan. So there would naturally be fishermen on these islands, and the Ueku is a fisherman’s oar.  It was not only used to propel the boat, but could also be used as a tiller to aid in controlling the boats course. During the historical periods where it was outlawed to carry weapons, these fishermen, after tying up their boats would take the Ueku with them. The weapon could then be used for self-defence against the Samurai and bandits.

The martial art of the Ueku was derived and developed from the art practiced in Shanghai, China. It utilises the edge of the weapon for cutting, as well as the ability to strike with either end of the weapon and be able to fling sand up into the opponents face.

Tsuken island is part of the Ryukyu Islands and is south of Okinawa, which has an interesting legend.  A samurai by the name of Chikin Uekata Masanori was exiled to this island, and in a dispute he was defeated in contention for the throne. Uekata was sentenced to be executed by being bound by a 300-pound stone and thrown into the sea. However, his executioner could not bring himself to do the deed as he found out that Uekata was a master of the Bo. So the executioner asked a fisherman named Asato to carry out the sentence for him. However, instead of drowning Uekata he lived in secrecy teaching Asato his Bo-jutsu. Eventually Asato surpassed his teacher to become a great Bo master. Asato became to be known as “Chikin Akachu” because he had a red sun burnt face. It is our Ueku kata that is named after Chikin Akachu, i.e. Chikin Aka Chu No Ueki Di. Another name for this kata is Tsuken Akachu No Iyeku De as the Ukeu kata comes from the island of Tsuken; it is believed to be over 600 years old. 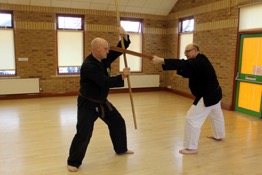 There is another tale for the Ueku whereby the Okinwans held boat races every year. Two villages used to compete and their stories would be told about the winners for decades to come. The winners were decided by two watchers at the finish line, one from each village. It was told that the two judges started to argue on who had won, their intense debate soon had the rowing teams joining in and the fighting ensued. Fists started flying and bodies rolling around in the sand. Then out from the watching crowd stepped forwards an old man. He picks up the Ueku and moves into the melee. His Ueku is seen to move and then disappear as sand dust forms a cloud in the air. Through this the old man is silhouetted, tripping over the rowers and flicking the sand up into their faces. After the sand has settled it was noticed that he had used this Ueku to dispel the fight. The fight was over with the rowers coughing and gagging and rubbing their eyes. The old man moved away quietly with his Ueku over his shoulder; there was no casualties only sand covered rowers. 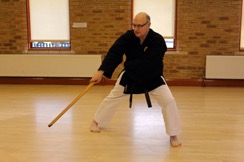 The Ueku is approximately 5 foot 6 inches in length where the paddle is 2 foot 3.5 inches in length by just less than 3.5 inches wide. The weapon is traditionally made of hardwood, such as Red Oak, but can be made from others like Ash or Purpleheart. The paddle has four types of striking surfaces. They are named as follows:

The paddle is known as the Monuchi, the Moto is the centre of the oar and Ushiro Tsukagashira is the butt end of the oar. The paddle was shaped in the fashion of one side being domed and the other roofed so as to cut through the water where there were strong currents. 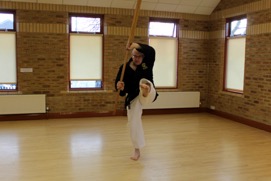 The Ueku is gripped by one hand at the moto just behind the monuchi and the other hand is around a shoulders width from the front hand. The grip is changed just like that of the Bo, but the feel of the weapon is completely different to that of the Bo. This is because the balance point of this weapon is where the paddle meets the handle. The heaviest part of this weapon is the paddle. It is this offset in weight of the weapon that increases the centrifugal force when it is used in swinging attacks making the Ueku a difficult weapon to control and master.

As like the Bo it is a long range weapon and has similar techniques to that of the Bo. You will find blocking, parrying, striking and thrusting techniques. However, in addition the paddle of the oar offers a sharper striking surface than the Bo. The ha thus becomes immensely powerful in the cutting techniques of this weapon. I have been told that the force and the blade would take the head off the shoulders. Because it was used by the Okinawan fishermen it is only natural to find techniques that incorporate throwing of the sand, called Sunakake. Although we see this in Bo, the Ueku has a broader surface, which is used more easily to throw material into an opponent’s eyes. We see all these techniques in the Matayoshi Kobudo Kodokan kata, Chikin Aka Chu No Ueku Di.

Within this kata there are also jumps whereby the practitioner is flicking up sand with their feet in to the addition the throwing of sand by the weapon; this is known as “me-tsubushi” – to blind. It is not an easy kata to learn and requires above all else good dexterity in body movement during the execution of the weapon. 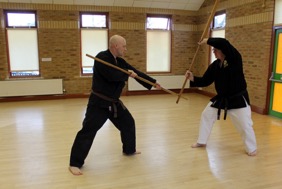 As with all the kobudo weapons it offers new concepts to learn and master. Training with the Ueku can also be beneficial to the empty hand martial arts as it develops coordination, upper body strength, and speed. Also the practitioner will notice a marked development in hand grip and forearm strength because swinging this weapon around requires a tight grip on the weapon.

This brings us to the end of the first six weapons that are studied in the MKKI, the other six are:

The above weapons are for the more advanced student in Matayoshi Kobudo and are only taught to higher Dan grades. 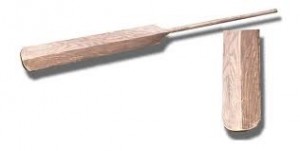