Below is the sixth article that was published in the MAI magazine about Matyoshi Kobudo. I would also like to thank Sanguinetti Sensei in his assistance and advice in the writing of the article. 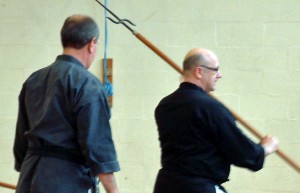 This is the fifth weapon in the Matayoshi Kobudo Kodokan syllabus and the reason for this becomes clear when you start training with this weapon. The Nunti Bo is not one of the better known weapons in the UK, such as the more common, Bo, Sai, Tunkua and even Kama. Most of us abbreviate it to Nunti. This weapon is practiced in conjunction with two Manji Sai to add the ability to throw those weapons during the execution of the Nunti Bo kata as they are very similar to the Sai. The spelling is many times represented incorrectly as Nunte. In Okinawan hogen is referred as Nuntei, and it means Nunchidi – thrusting hand. At first glance the weapon looks like a spear, but is composed of a Bo with a Manji Sai mounted on one end. It is uniquely Okinawan, as the Japanese have similar types of weapon in the guise of the Yari (spear) and Naginata (halberd), but these will not be used in the same way as the Nunti Bo as it’s a spear with hooks. 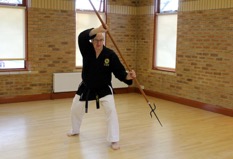 I first saw the Nunti Bo very briefly in the 1986 Karate Kid Part 2 film where Mr Miyagi is defending against it and eventually disarms his attacker. Knowing what I know now I don’t think I would go up against this weapon empty handed, but then again I’m not Mr Miyagi. I suppose my fascination for what this weapon could do started then. The only downfall I had was that it was not a popular training weapon in the UK. So it was when I went to Okinawa in 1998 I decided to purchase one and bring it back to the UK. It sat in storage for quite some time as I did not have a Sensei that could teach me this weapon correctly. It wasn’t until I became a member of the Matayoshi Kobudo Kodokan International where Sanguinetti Sensei started to teach me this weapon. I grew to like it very quickly as it was similar to the Bo, but has this extra weapon of the Manji Sai on the end whereby other techniques can be done with devastating consequences. Today you can import them more easily to the UK from Shureido (mass made) or Crane Mountain Weapons (handmade).

History of the Nunti Bo 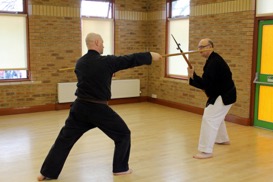 It is thought to be a fisherman’s tool, where the point could be used to stab the fish. The inward hook of the Nunti Bo was used to pull nets in the boats when fishing and the outward facing hook to push their boats off from the dock. Because it was a tool these fishermen were allowed to carry and use it during the years where weapons were banned by their Satsuma overlords. These men had a very effective weapon for dealing with rogues and bandits. Furthermore, when up against the Samurai, due to the length and the fact it had the Manji Sai on one end, it was very advantageous defending against these sword wielding men.

The origin of this weapon is thought to be from China and brought to Okinawa some 600 years ago during the prosperous trade they had with China. In fact a similar weapon is in the book Bubishi called the Sabu. As a martial art Nunti-jutsu resembles the Bo-jutsu which was performed in the Tsuken Island of the Ryukyu archipelago. It was normal to find these men wielding three Manji, one attached to the Bo and the other two held by their belts and used like Sai.

On his trips to China, our founder Matayoshi Shinko learnt this art of Nunti-jutsu in Shanghai from Kingai Sensei. This has been passed down to his son Matayoshi Shinpo Sensei and then onto the instructors and students of the Matayoshi Kobudo Kodokan. I think we’re very honoured to be taught this weapon as it is not very common in other systems.

Construction of the Nunti Bo 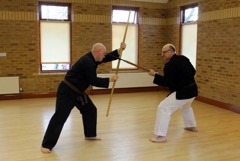 Today’s Nunti Bo is generally made of Red Oak hard wood with chrome or natural Manji on one end. If getting a Nunti Bo handmade discuss with the manufacturer the type of wood that would be suitable for contact, especially if you are training in the Matayoshi Kobudo Kodokan system. Woods such as White Oak, Hickory, Jatoba and Purpleheart all can take a beating but some are better than others. The total length is around 81 inches, but can be handmade to the length of the individual.

The parts of the Nunti are very similar to that of the Sai and named as follows: 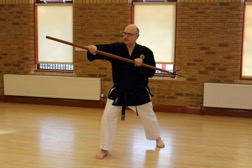 The first thing you notice about the Nunti Bo when you hold one is that it is top-heavy. The balance point rides high towards the Manji end of the weapon. This makes it difficult to control and over time you can start to feel the muscles in your arms getting a good workout. As with all weapons, the control and manipulation is mastered the more you practice with it. Nunti Bo training can be beneficial for other martial arts, especially your empty hand art, as it’s like training with weights in your hands.

The second thing you are conscious of is the Manji itself, especially where the tsuba is pointing. This is most important as it is used in the various techniques, but more so as you could end up jabbing yourself with the Tsume part of the Manji that is pointing down. I’m still checking myself with a backward glance to see where it is lying in relation to my arm before carrying out a thrust with the Bo end of the weapon.

As with the Bo the Nunti Bo is a long range weapon. It is one of my favourite weapons I like to train with as it has the attributes of the Bo but with the added ability to strike, catch/trap, stab, hook etc with the Manji. The Tsume can be used to get behind the body, such as the head, legs and to pull the opponent inwards. It can also hook the opponent’s weapon when they block the Nunti Bo pulling them off balance prior to stabbing them with the 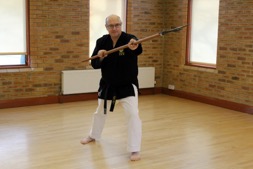 Mae Saki. The outward pointed end of the Tsume can also be used to pierce the throat, eyes etc after striking with the Mae Monuchi, similar to that of the Sai. Another attribute is after the block, the downward pointing end of the Manji can then be used to hook and break posture of the opponent prior to the counter with the Nunti Bo.

Because the balance is high towards the Nunti the weapon has the ability to swing around at surprising velocity thus using the end of the Bo for strikes, blocks and thrusts.

Most of these techniques can be seen in the Nunti No Kata and practiced with the partner during the bunkai. The kata teaches the practitioner how to move from stance to stance, changing directions, executing the various strikes, blocks, thrusts and hooks with this top heavy weapon. Furthermore, in this kata it can be seen that the practitioner carries two other Manji Sai, which are held in back of the belt. These are thrown towards the opponent’s feet, which is very similar to the throws seen in the Sai kata. 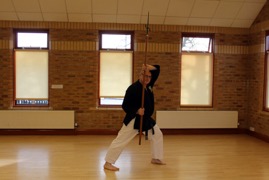